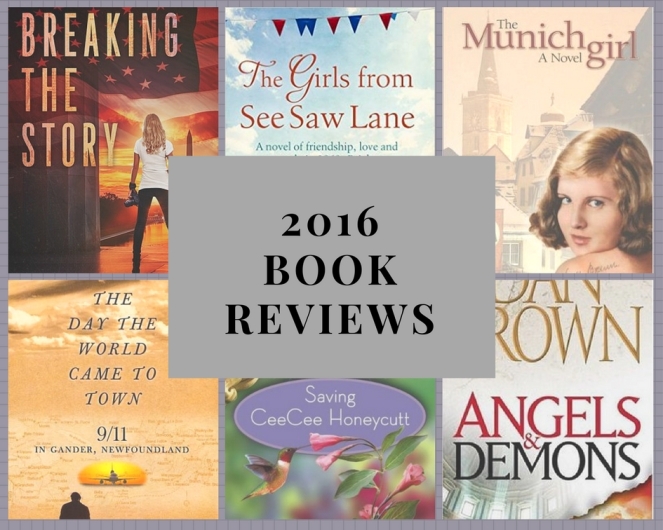 Here are my top 10 favourite books that I read in 2016. To see what else I read during that year, please visit my Read in 2016 shelf on Goodreads.

First impressions and expectations:
Goodreads describes Saving CeeCee Honeycutt as a mix of Steele Magnolia’s and The Help, which made me very eager to dive into this book. As I began I was instantly reminded of The Secret Life of Bee’s and a light dose of Divine Secrets of the Ya-ya Sisterhood, two titles I really enjoyed. Needless to say I began it with high expectations.

Hoffman and Kidd:
The tone of the writing was reminiscent of Sue Monk Kidd (The Secret Life of Bees) because it was written from the point of view of a young girl in the 1960’s. CeeCee was a smart girl who did her best to make her way in life without the guidance of her parents. Her curiosity and willingness to learn made her such an interesting and likable character. With its southern setting the civil rights movements during the time was also mentioned, along with numerous other cultural references from the era.

Comparing Mental Illness:
Beth Hoffman used some wonderful imagery and metaphors to describe CeeCee’s story. One particular example that I found effective was where mental illness was compared to a battlefield and a long fought interior war. This was just one example of many that made me stop, re-read and reflect.

Independent Women:
Like Rebecca Wells Divine Secrets of the Ya-Ya Sisterhood, Hoffman also features a wonderful cast of strong willed and independent women. There was no shortage of wisdom shared to CeeCee. Although some of the characters weren’t as favourable as others, they too brought humor and excitement to the story.

Recommendations:
Saving CeeCee Honeycutt is very deserving of a 5 star rating. It had just the right combination of tragedy, humor and excitement. I highly recommend this book to fans of books set in the south during the 1960s. It was such a wonderful reading experience and one I intend to read over and over again.

I was sent a copy of The Munich Girl by Phyllis Edgerly Ring from the author in exchange for an honest review.

When I first read the synopsis for The Munich Girl, I knew I had to read this book. As a lover of historical fiction, I have read from a variety of different perspectives of World War II, however this was the first time I had read about German citizens who lived “freely” in the presence of the Third Reich. I use the word “freely” loosely as regular German citizens were far from free during Hitler’s reign.

Phyllis Edgerly Ring did a wonderful job of portraying Eva Braun’s life through the eyes of Peggy and as a result of Anna’s tireless research. She got straight to the point of the story without dragging on an introduction and the plot line moved steadily throughout. Although I read this in Kindle format, this book was nicely put together. Each section began with a photo and each chapter was marked with Eva Bruan’s initials in a Kleeblatt.

I found it interesting how the author created similarities between Anna’s relationship with her husband Lowell and that of Eva and Hitler. It was clever in that it allows readers to build compassion about the situations both women were in. Eva was portrayed not in a cruel anti-Semitic way, but as a woman who was caring, absolutely devoted and very intelligent.

I was pleased that this book wasn’t centered around, or bogged down with the politics of World War II. Instead it was more of a tale about friendship, sacrifices and legacies.

The Munich Girl is a heartbreaking story with revelations from start to finish. I would highly recommend it to lovers of historical fiction. This would be especially of interest of those who enjoy reading about different perspectives during World War II. 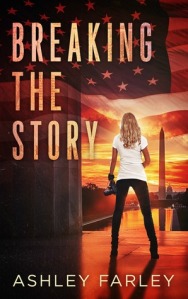 I was sent an e-copy of Breaking the Story by Ashley Farley from the publisher and Netgalley in exchange for an honest review.

Well Scottie has gone and got herself into trouble yet again. Picking up several months after the novella Merry Mary left off, the photojournalist is now covering the election. It was nice to be reunited with the characters that readers were briefly introduced to before. I enjoyed getting to know more about Scottie, her brother Will and her loving parents.

This full length book allowed me to get a better understanding of Ashley Farley’s writing style. She was really able to go into detail with her characters, the setting and the story.

Breaking the Story is a contemporary political suspense with some romance thrown in for good measure. As someone who doesn’t care much for politics I was worried that this would overshadow and dominate the story. However the face pace plotline and sexual tension between Scottie and Guy made for an enjoyable reading experience. In fact I couldn’t put it down.

Scottie is put into a situation where she has to decide between getting her big break as a photojournalist or possibly ruining the lives of many people. This brings up a good question to readers about what they would do in a situation like this. Would you compromise your own integrity if it meant furthering their career?

I would recommend Ashley Farley’s Breaking the Story to other fans of contemporary fiction. I look forward to reading more from this author and hope for more featuring the characters in this book.

4. The Girls from See Saw Lane: A novel of friendship, love and tragedy in 1960s Brighton (Brighton Girls Trilogy, #1) by Sandy Taylor

I received a copy of The Girls from See Saw Lane (Brighton Girls Trilogy #1) by Sandy Taylor from the publisher via NetGalley in exchange for an honest review.

The Girls from See Saw Lane is my first 5 star rated book of 2016. I couldn’t put this story down, nor did I want it to end. I got so wrapped up in Dottie and Mary’s lives and the time they grew up in. The 1960’s is one of my favourite decades in terms of pop culture, but ironically I haven’t read too many books from this era. When I saw this on NetGalley I jumped at the chance to read it and was pleasantly surprised when I was approved by the publisher.

Although I loved to read about the fashion and music of the 1960’s, I was happy that they didn’t overshadow the true point behind this story, which was friendship. This is a topic that can stand the test of time regardless what decade the setting is in. For this reason I think that The Girls from See Saw Lane would appeal to the young women of today.

If you’ve ever had a best friend, you will relate to Taylor’s wonderful characters. I know I sure did. This book will make you laugh and cry and even reminisce of days gone by. I can’t wait to read more from this author and coming books in the trilogy.

Angels and Demons is a book I never would have thought to pick up until I learned that Tom Hanks (one of my favourite actors) was starting in the movie adaptation. Although there were some parts I didn’t exactly understand, I really did enjoy it I decided that I would give the book a try.

I found a beautiful box set including this book and its sequel The Da Vinci Code at a used book store for a great deal. Included inside the front and back cover are beautiful colour pictures of specific places that the fictional characters visited throughout the Vatican and surrounding Rome.

As it had been quite some time since I last watched the movie, I was a bit foggy on how it all played out, but I began reading hoping that I would get a better understanding of the story line.

At almost 600 pages in length, this book is very rich in detail, which is something I was grateful for as there was so much history, tradition and scientific facts that were pertinent to the story. The fast pace, mystery and excitement made it hard for me to put it down and so I flew through it. I liked how it was told from the point of view of many different characters both inside the Vatican and out. This gave such a wide perspective of the events that were unfolding and kept the reader guessing as to who was involved.

Near the end of the book I found it became so bogged down with tragedy that wasn’t exactly necessary as so much had already happened. The story still kept my interest but I found I had to suspend my belief more than ever to get through the last 100 (or so) pages. For that reason I decided on a 4/5 rating instead of my intended 5.

Angels and Demons is one of the most engrossing books I have read in a long time. Dan Brown’s writing style is definitely a good fit for me and I can’t wait to continue on with the rest of the books in the Robert Langdon series. I would recommend this book to those who enjoy suspense focusing on controversial topics.

6. The Day the World Came to Town: 9/11 in Gander, Newfoundland by Jim DeFede

Since the tragic events of that day over 14 years ago, I have heard many different accounts from survivors, witnesses and citizens but not much about those who were stranded. Defede’s book is unique in that it shines a light on situations pertaining to that day, which many people haven’t heard about.

I enjoyed how Defede took time to give some background information on Newfoundland as a province and the importance of Gander International Airport in aviation. The famous Newfoundland hospitality really speaks for itself. This book describes how Newfoundlanders donated everything from towels and bedding to clothing and even the use of their own bathrooms, to make sure their unexpected visitors had everything they needed.

This topic is important in that it shows a strong friendship between our (Canadian and American) two countries. When one country is in crisis, another stepped up to offer aid.

Reading this book made me even more proud of my own Newfoundland heritage. I would recommend this book to those who are interested in Canadian-American relations and those who enjoy reading nonfiction.

8. The Color Purple by Alice Walker

9. The Bookshop on the Corner by Jenny Colgan

10. Heart of the Matter by Emily Giffin